Menu
<Back to catalog 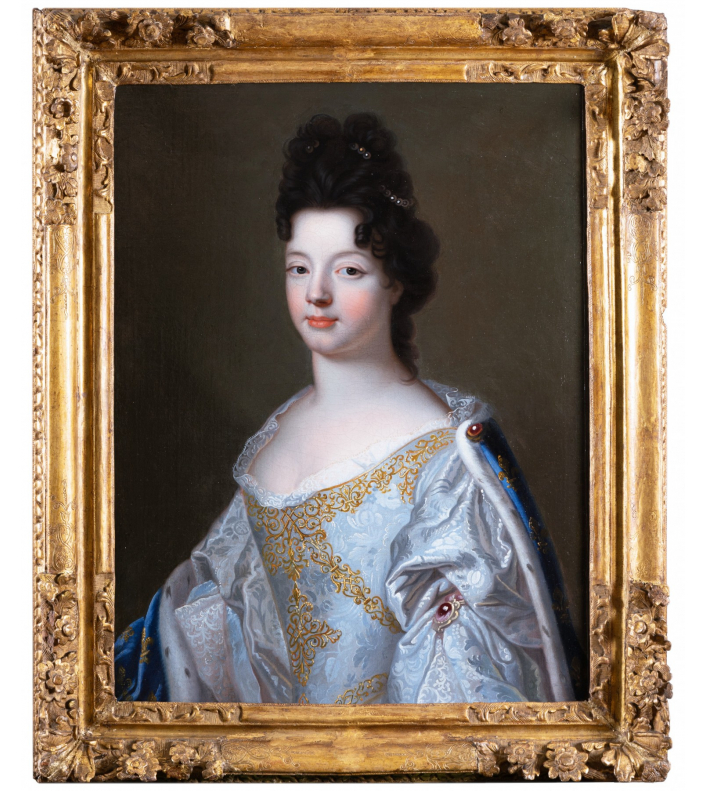 Duchess of Lorraine, workshop of François de Troy, circa 1698

Portrait of Elisabeth-Charlotte d'Orléans (Mademoiselle de Chartres), niece of Louis XIV, daughter of the Duke of Orléans dit Monsieur and of Charlotte-Élisabeth of Bavaria; Duchess of Lorraine by her marriage to Leopold I.
The young princess is portrayed at mid-height, turned three-quarters.

High head carriage, her hair is Fontanges style, her heavy mass of black hair is positioned on several floors, adorned with garlands of pearls. Two curls framing the forehead, the face slightly elongated, the mouth with rounded lips sketching a half-smile. Her fresh complexion and full cheeks indicate the young age of the model.
She is wearing a white silk satin dress with an oval neckline edged with fine lace. Her dress is embroidered with gold threads with fleur-de-lys motifs and windings. Its raised sleeves are tightened above the elbow by a ruby set in gold. Stapled to his shoulders, a blue velvet coat embroidered with fleur-de-lys in gold thread, it is lined with ermine fur. This royal coat is a sign of her status as a blood princess.
Her silhouette, dressed in her pearly white dress, stands out against a gray-green background. The contrast thus obtained accentuates the depth and brings volume to the figure.
Very beautiful execution, with precise touches for the details of the costume, the skilfully modeled face, the harmony of the colors associated with modulated lighting.

Our work is known by several identical portraits with the exception of the format (half-legged) preserved in the various public and private collections.

We can assume that the original portrait was commissioned by King Louis XIV or his mother Elisabeth of Bavaria, prior to his marriage to Duke Leopold I of Lorraine (1698).

François de Troy and his workshop then executed the replicas intended for the princess's family, probably before her final departure from Versailles.

French portraitist, from a family of Toulouse artists, was trained in Paris in the studio of Claude Lefebvre who taught him the profession of portraitist. This explains the sure technique and the serious atmosphere of his works. De Troy is an heir to the French tradition: his art is imbued with realism and restraint. The sober layout (the subject is seen half-length, usually seated) and the dark background allow the focus to be on the face and hands. Very famous in his time, he abandoned history painting very early and became director of the Royal Academy of Painting and Sculpture. First employed by Madame de Montespan, he then produced several portraits of the royal family in the years 1680-1690. However, it was a few years later that he gave the full measure of his art, when he worked in the service of the Dukes of Maine and their brilliant court of Sceaux. He will also be the portraitist of the royal family of England, exiled in France to the castle of Saint-Germain-en-Laye from 1689. He will also be called upon several times by the Parisian aldermen for religious commissions. His son Jean-François (1679 - 1752) collaborated with him at the end of his career before taking up the torch and perpetuating the family glory.

Élisabeth-Charlotte d'Orléans, granddaughter of France, known as "Mademoiselle de Chartres", then "Mademoiselle" as the eldest of the granddaughters of King Louis XIII, member of the House of France, born September 13, 1676 in Saint-Cloud and died on December 23, 1744 in Commercy, is the daughter of “Monsieur” Duke of Orléans and brother of Louis XIV of France, and of Elisabeth-Charlotte of Bavaria, Princess Palatine; she married the Duke of Lorraine and Bar Léopold I. She assumed the Regency of the Duchies for her son detained in Vienna from 1729 to 1737 and then was invested for life with the Principality of Commercy.
If she could not marry her daughter Élisabeth-Thérèse to Louis XV, she is, through her son François, husband of Marie-Thérèse of Austria, the grandmother of Marie-Antoinette and the ancestor of all the current Habsburg-Lorraine .