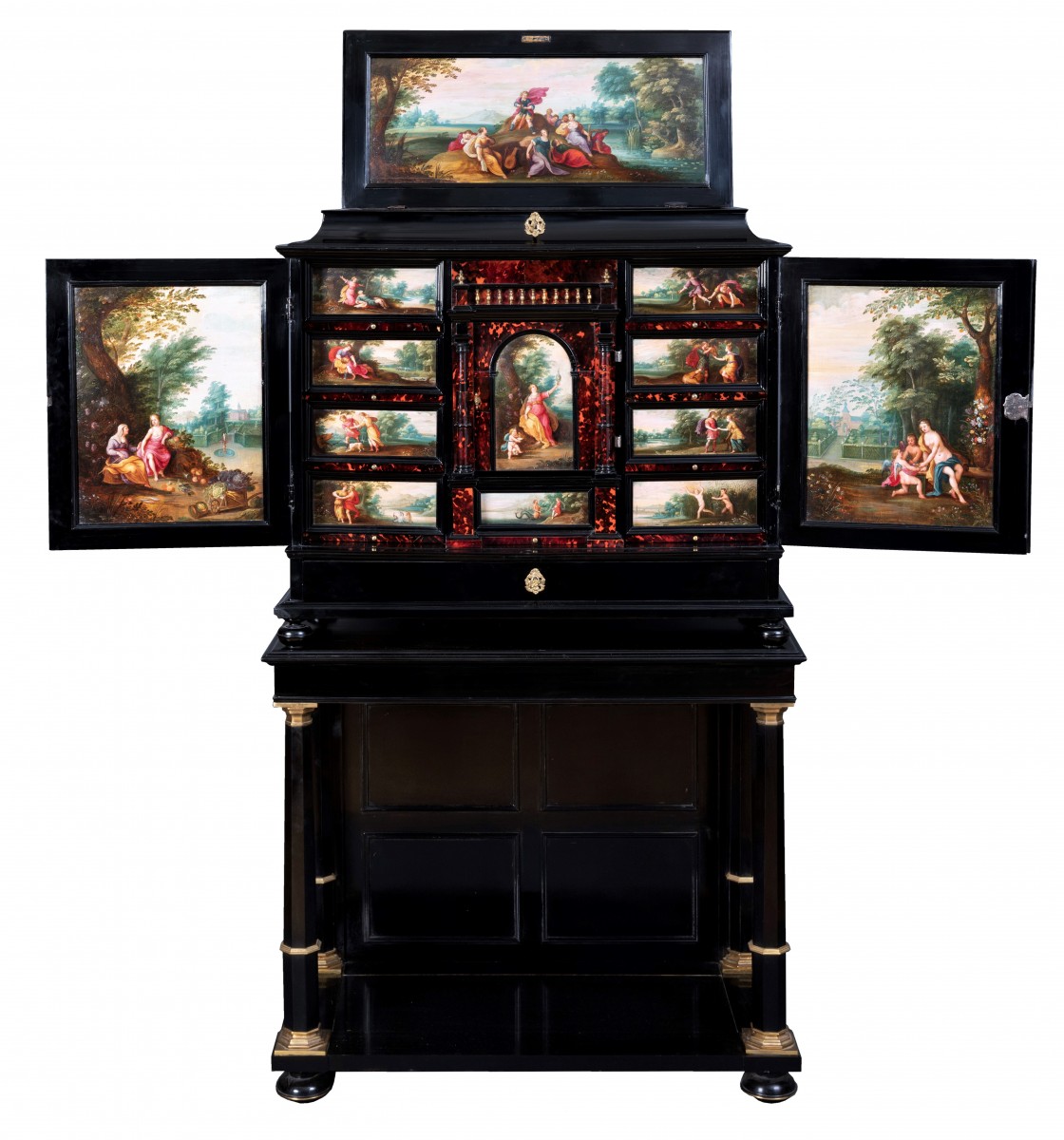 This precious cabinet is one of the rare emblematic works of the city of Antwerp, produced thanks to the collaboration between a painter and a cabinetmaker, and intended to adorn Kunstkammer (private museums) or art cabinets.

Our cabinet is decorated with 13 panels painted with mythological and allegorical subjects and perfectly reflects the Antwerp pictorial trend of the early 17th century. Definitely in the spirit of the times, where one of the roles of the kunstkammer (the room for which it is intended) is to be able to contemplate the world in all its aspects.

It opens with two doors revealing 10 drawers, 9 of which have painted panels on the front, a central door and an upper compartment, the interior of which is also decorated with a painted panel.

The left door depicts a subject from Roman mythology: Pomona and Vertumnus in the garden. The fruits and vegetables placed at the feet of Pomona evoke the allegory of summer and the abundance of nature. While on the right door, under the airs of Venus and Love placed in a castle park surrounded by puttis, it is the allegory of spring which is thus depicted, the bouquets and vases of flowers are its main attributs.

The small central door displays the Allegory of Vanity, personified by a young woman holding an oil lamp from which smoke escapes (the flight of time), the putto blowing soap bubbles ( meaning the fragility of life) sits on a skull, a death's symbol.

The panel in the upper compartment shows the Apollo and the nine muses at Mount Parnassus.

This depiction of the world through a cabinet continues with the choice of topics used for the drawer panels which are inspired by the Metamorphosis of Ovid engraved by Antonio Tempesta. These engravings published in 1606 considerably increased the mythological pictorial repertoire and quickly became the source of inspiration for Antwerp artists.

Left side from top to bottom:

Right side from top to bottom:

The stories in "The Metamorphoses" were perfectly suited subjects for cabinets of curiosities whose function was to reflect and explain the world and its origins.

An almost identical cabinet, also attributed to Hendrick Van Balen with all similar painted panels, was sold at Christie's London, December 8, 2011, lot no 107. See also another cabinet attributed to Hendrick Van Balen, sold at Christie's London 27 / 10/2015, lot 226, some panels of which are very similar to ours (the allegory of Vanity, Glaucos seduced by Scylla, Pomona and Vertumnus).

The Philadelphia Museum of Art exhibits a serie of small cabinet panels by Hendrick Van Balen, two of which have the same subject and are similar to our panels.

In addition to the fabulous painted decoration, our cabinet is executed with refinement and use of expensive materials. It has a sober but polished exterior in ebony veneer and embellished with wavy molding frames. Inside, tortoiseshell veneer is used to increase the preciousness of the whole piece, which is particularly evidenced by two half-columns applied on the central door and the drawer above with a gallery of gilt balusters. Once opened, the little door reveals a theater designed by alternating mirrors and half-columns in tortoiseshell veneer adorned with gilt bronze rings and the floor made up of ebony and ivory rectangles.

Following the classic design, it has a large frieze drawer and ball feet.

Our cabinet is set on a very elegant 19th century ebony veneered stand in ebony veneer, composed of two beautiful columns and two half-columns, decorated with capitals, rings and bases in gilt bronze.

The painted panels have preserved all the freshness of their original colors.

Antwerp, circa 1630, panels attributed to Hendrick Van Balen and his workshop.

In the 17th century, Antwerp was the first European center for cabinets with painted panels. The illustrations of contemporary interiors show that it was the display furniture, often in ebony veneer on the outside which when opened amazed by the richness of their small oil paintings. These cabinets were intended to store collections of jewelry, silver, minerals, shells and other specimens, in connection with the princely tradition of the kunstkammer.

We can observe a similar cabinet in Frans Francken's painting "Achilles among the daughters of Lycomede" (circa 1620, Louvre museum). Among all the riches that the merchants bring to the king of Lycomede, there's an ebony cabinet with painted panels.

Definitely works of art thanks to their decor, the painted panel cabinets have suffered dismantling and destruction over the decades due to the richness of their interiors, and few have reached us intact and complete.

The cabinet we're offering here complete and displaying all 13 original panels, remarkable for their quality and the magnificent colour palette, is all the more rare because of its mythological and allegorical subjects, unlike many others more frequently depicting religious scenes. Regarding early 17th century Antwerp school paintings, it is very difficult to find on the art market such subjects as Pomona and Vertumnus, or Allegory of Spring.

Hendrick van Balen I (1573-1632) was a master of the Antwerp Guild of St. Luke and ran his own workshop for thirty years, counting Anthony van Dyck as one of his pupils. Although he began his career painting large-scale altarpieces, Van Balen is best known for his pictures on cabinets. In keeping with the popular taste of the time, mythological scenes frequently occur on his small-scale paintings and often feature imagery from Ovid's Metamorphoses.